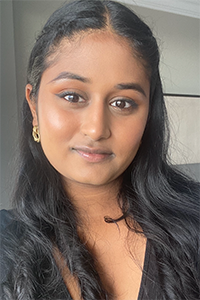 Vaidehi Patil (better known as Veda) grew up in the bustling city of Mumbai in India. She went on to study Bioengineering at University of Sheffield in the UK followed by her MSc in Biomaterials at University College London. Her eventual goal is to conduct translational research in Biomedical Engineering that improves quality of life for patients. Outside of the lab, she enjoys dancing, embroidery, cooking new cuisines and cinema.

Research: Calcific aortic valve disease (CAVD) is the most prevalent valve disease, affecting 2.5% people in the US; this statistic rises sharply to 25% in adults over 65 years of age. Although several characteristics of end-stage CAVD have been described, there is still a large gap in knowledge regarding the onset and progression of CAVD. This knowledge gap is especially important, as it has hindered the development of pharmacological therapies for CAVD; total valve replacement remains the only option for CAVD treatment. There are several factors that increase risk of developing CAVD, such as age, smoking, hyperlipidemia, diabetes, and biological sex. In CAVD, male sex is not only an indicator of increased risk but also a different disease presentation wherein for the same extent of sclerosis, males have prominent calcification while females tend to have a fibrotic presentation. Sex differences can arise due to both inherent cellular sex and acquired as a result of sex hormones. One such hormone, estrogen, has been well-established to exhibit cardioprotective properties in adult females. We suggest that cellular sex is a major contributor towards the lower incidence of valve disease in females. Additionally, we also hypothesize that sex and estrogen play independent roles in the divergence of disease progression among sexes. In our research we will examine the commencement and progression of inflammation and fibrosis in valvular cells using pathological stimuli, such as pathological shear stress and pro-fibrotic stimulus TGF-beta1. Cells will be treated with estrogen simulating the three main hormonal stages in females, pre-pubescence, adulthood and menopause. We will investigate how biological sex and sex steroids like estrogen may contribute to progression of CAVD, thereby allowing us to map potential pathways involved in the process, and informing the future development of sex-specific treatments.